Gurdwara Mehdiana Sahib, also called the 'School of Sikh History' is a Sikh gurdwara located in the village of Mehdiana, just outside Manuke, near Jagraon in Ludhiana district, India. 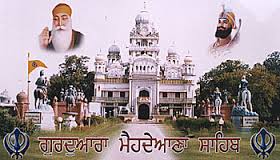 Sikhs believe the site of the gurdwara to be where Guru Gobind Singh and his followers rested after the Battle of Chamkauragainst the Imperial Mughal armies of Aurangzeb and where he was requested by his followers or the Sangat to write theZafarnamah. The gurdwara is known for its uniquely coloured architecture and monuments depicting important events in Sikh

history.Additionally, the Dhaab (natural water reservoir), greenery, birds and trees made Mehdiana Sahib popular with pilgrims.Today parts of the Gurdwara have become dilapidated due to a lack of funds resulting from its isolated location and private ownership status. In 1705 Mughal armies under Aurangzeb laid siege to Anandpur Sahib intent on reducing the influence of Guru Gobind Singhand the Khalsa. During the siege Aurangzeb sent a signed letter to Guru Gobind Singh offering safe passage out ofAnandpur. Pressed by his followers and family he accepted and evacuated Anandpur on 20–21 December 1705.

Guru Gobind Singh, his two eldest sons (Sahibzada Jujhar Singh and Sahibzada Ajit Singh) and thirty-eight followers arrived at Chamkaur, where they were granted shelter. Despite assurance from Aurangzeb of safe passage a contingent of the imperial army was sent to lay siege to the haveli. Vastly outnumbered Guru Gobind Singh was disguised as another Sikh and escaped with only three others including Bhai Daya Singh and Bhai Dharam Das.

Guru Gobind Singh reached Mehdiana after gathering support from across the Malwa region passing through the villages of Raikot, Lamme Jattpure & Manuke before finally reaching Mehdiana. The nearest habitation at the time was almost 3 miles (4.8 km) away so Guru Gobind Singh and his followers rested by cleaned their teeth using tree twigs (Daatan) and bathed in the water (Daab). While Guru Gobind Singh was meditating Bhai Daya Singh asked what they should do next. Guru Gobind Singh's reply encouraged his followers to have faith in God’s will as they had done no wrong. "Bhai Daya Singh I have returned the Debt and have become victorious. Singh and Tiger are kings of the same jungle. Singhs should keep faith in the Almighty."

Still distressed Bhai Daya Singh again repeated his requested, on behalf of all Sikhs (Sangat). Guru Gobind Singh's reply showed that despite being Guru to the Sikhs Guru Gobind Singh was only a mortal man and that in reality he was a servant to God and the Sangat. The quote refers to the execution Guru Gobind Singh’s farther and proceedingSikh Guru Tegh Bahadur for opposing forced conversion to Islam of Kashmiris by Aurangzeb "Sangat is bigger than Guru. [Sangat] Sent father to Delhi on Kashmiri Pandits plea. [Then] On Sangat's request [I] left Anandpur Sahib, [I] left Chamkaur Garhi on Sangat's request, [And] now you are asking me on Sangat's behalf."

Discussions about the future of the Sikhs continued until on Sangat's request Guru Gobind Singh began to prepare his mind to begin writing the Zafarnamah. Guru Gobind Singh went to the village Chakkar that night and the next day travelled to Deena Sahib to stay with Lakhmir and Shamir; after gathering support at the villages Takhtupura and Madhe. In Chakkar he wrote the Zafarnamah and sent it to Aurangzeb in Aurangabad with Bhai Daya Singh and Bhai Dharam Das. For this reason pilgrims claim that Mehdiana Sahib has Guru Gobind Singh’s blessing and that visiting will mean their prayers will not go unanswered