The Police District Jagraon came into existence vide Govt. of Punjab Deptt. of Home Affairs and Justice (Home-I Branch) notification No. 4/3/92-2H (I) Spl./557 Dated 29-01-92 received through DGP Punjab, Chandigarh's office Endst. No. 656-96/B-2 dated 29-1-1992 due to increase terrorists activities in the region and people were feeling terrorism in their mind. The State Govt. to remove the fear of terrorism from their minds and further to increase the confidence of general public and to check the activities of terrorists, Police District. Jagraon was created, so that the developments policies of State Govt. could be implemented in good manners. Latter on the State Government vide Notification No. 4/5/2007-2H1/686 dated 17-4-07,received through the Director General of Police, Punjab, Chandigarh vide his office Endst. No. 18492-593/Con. SA-I(1) dated 20-4-2007 re-organized the area of Distt. Ludhiana and formed a new Police District named Ludhiana (Rural) having 274 villages, population of about 14,25,000 (approximately) & an area of about 1500 sqr. KMs. It touches the boundaries of distts. Ludhiana (City), Jalandhar, Moga, Sangrur and Barnala.

Two important highways i.e. Ludhiana-Ferozepur (National Highway) and Ludhiana-Barnala (State Highway)and two railway tracks i.e. Ludhiana-Ferozepur(Baddowal to Nanaksar) approximately 50Kms. & Ludhiana-Dhuri railway track and approximately 02Kms of area of Ludhiana-Dhuri rail section in village Ghugrana of PS Jodhan fall within the jurisdiction of this district. The Sutlej river touches the boundary of this district from north side flowing from east to west along side the area of distt. Ludhiana (Rural). The annual Chhapar Mela is held in the area of this Police District, where large number of people gather for religious ceremonies and political conferences of all the main political parties active in the state. Mostly the people of distt. Ludhiana (Rural) depend upon agriculture as well as small dairy and poultry farms for their livelyhood. However, literacy rate of the district is quite high and a large number of NRIs, transporters and service personnel of different military and para military organizations of the country hails from this area.

Jagraon and Raikot are the two sub-divisional towns located with in the area of to Police ditrict Ludhiana(Rural) and Sidhwan Bet, Bhundri, Sudhar, Jodhan and Mullanpur Dakha etc. are some after important towns falling with in the jurisdictional limits this police district. Air Force Station at Halwara and the Army and ITBP units in village Baddowal are also situated in the area of this district. Historic villages like Sarabha and Gujjarwal are a part of this district and important religious places like Nanaksar and Mehandiana Sahib are situated within the area of this district. PS City Raikot, Hathur, NRI & PS Women have been came into existence vide Govt. of PB Department Home Affairs & Justice (Home-I Branch)Notification No. S.O.25/CA-2/1974/S-2012 dated 30-4-2012.Distt. Ludhiana (Rural)has seven Police Stations and three permanent Police Posts, besides 08 temporary Police Posts as per detail given below:- 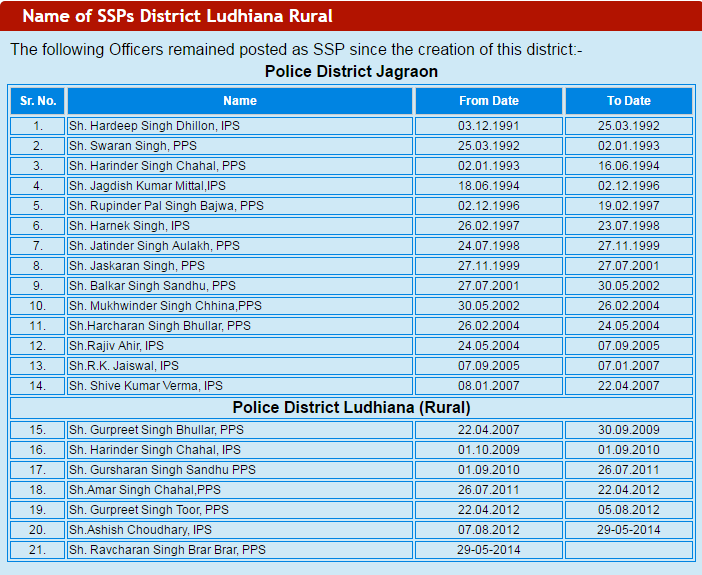